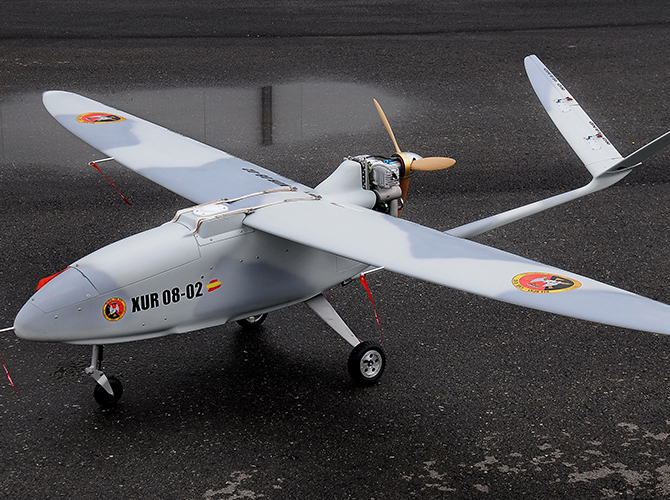 Madrid, December 18, 2017 – The Spanish Armed Forces, through the Directorate General of Armament and Materials (DGAM) of the Ministry of Defence, has recently acquired several units of the Atlantic and Tucan UAS, two remotely manned platforms developed by SCR, a company that is part of the everis Aerospace and Defense Group.

On the one hand, DGAM has decided to purchase two units of the Atlantic RPAS and one unit of the Tucan RPAS for integration into their Information and Tracking Artillery Group (GAIL) II/63. This Army unit has been evaluating the capabilities of these aircraft in recent months under the Rapaz Project.

Additionally, the DGAM has acquired four Tucan units, two of them assigned to carrying out perimeter control functions at the San Gregorio base in Zaragoza, and two to support pilot training at the Air Force’s Matacán School Group (GRUEMA) in Salamanca. The total value of the contract was 1.5 million euros.

“During the different phases of the Rapaz Project we have worked closely with the Army and especially with GAIL to upgrade our platforms based on their recommendations and requirements,” said José Antonio Ceballos, SCR’s CEO. “Getting these contracts is of paramount importance for SCR and everis Aerospace and Defense. The confidence of the Armed Forces in our line of UAS supposes a very important endorsement to the work that we have been undertaking since the foundation of the company in 1994.

New milestones for the Rapaz Project

In addition to the aforementioned acquisitions, significant technical developments have been made in recent weeks. During the new flight campaigns conducted as part of the Rapaz Project in November, the Atlantic UAS reached a 90km range with real-time video and data link without interference and without using intermediate communication relays in the field.

This achievement adds to previous milestones achieved in prior years, including having reached a flight altitude of 12,000 feet. Likewise, the Tucan UAS reached an operational altitude of 8,000 feet, as part of the Rapaz Project campaign.

The Atlantic is a midrange and high-performance UAS (Unmanned Aerial System) that can be used in both military and civilian operations. It is a fixed-wing platform made of composite materials with a take-off weight of 50 kg and prepared for the installation of a wide variety of payloads. These features render Atlantic a versatile and robust system which also stands out for its user-friendliness.

The Tucan platform is a smaller UAS, with lower take-off weight of 5 kg and a span of 2.73 m. It uses an electric propulsion system with a range of 90 minutes and is designed for quick start action, specially designed for ISTAR missions (Intelligence, Surveillance, Target Acquisition and Reconnaissance) missions.