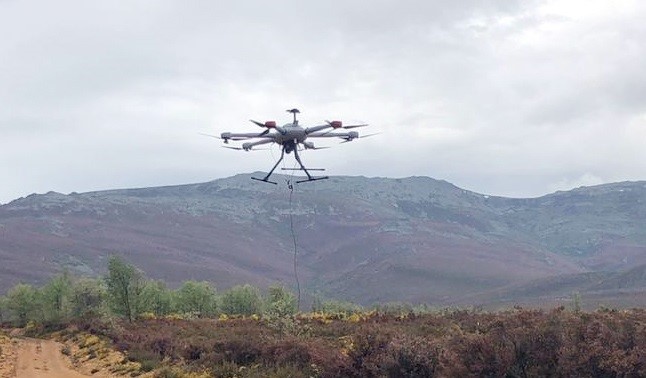 Madrid, 20th April, 2019 – SCR and everis Aerospace, Defense and Security (everis ADS) have put to the test the capabilities of their tethered RPAS, ASTER-T, during a demonstration for the Location and Information Artillery Group (GAIL) II/63 of the Land Army of Spain. The system has participated in an unexploded ordnance search operation in the El Teleno Proving Ground, in León.

During the exercise, the ASTER-T successfully performed a demonstration flight including an automated take-off, a flight above 60 meters, permanence at the same height, target visualization and monitoring, and an automatic landing.

This is the first demonstration of the ASTER-T in Spain, but it has already been exported to a foreign country. The generation of the system has been possible thanks to the technological alliance between everis ADS and the company Dronetools.

The ASTER-T is a tethered hexacopter that provides fast and uninterrupted aerial coverage in large areas thanks to its continuous supply. The system is connected to a land power supply, which guarantees unlimited autonomy.

Its automatic pilot is fully autonomous and adapted to ‘tether’ missions, and it has an onboard emergency battery that allows a safe recovery and descent in any eventuality. The ASTER-T reaches a height of up to 100 meters, and integrates a thermic camera with a visible spectrum including a continuous zoom of up to 40 magnifications and integrated communications, also making it possible to download video and data safely through the cable.

Among its numerous applications, it can be used to monitor crises, support public security, quickly deploy emergency radio-communications, protect assets, and for surveillance, both in private and in civil environments.

The ASTER-T will be one of the novelties that everis ADS will display at its stand (B10) during the first edition of FEINDEF, which will start next 29th May in Madrid. Due to this, the UAS area of the company will play a prominent role at the event.